Being a communication specialist

Dr. Mitsuko Saito, the late founder of Communicators and former ICU professor emeritus, defined communication as being “a warm-hearted exchange between people,” and believed that interpreters needed to be communication specialists in addition to being language specialists.

In keeping with her principles, we are committed to implementing education and training from the standpoint of communication studies so that we can provide our clients with only interpreters (communication specialists) that have the skills and attitude to facilitate a sincere exchange between the speaker and listener.

Our mission is to support our clients and to contribute to society in various cross-cultural communication settings. 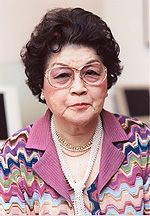 Professor Saito, who trained numerous excellent communication specialists over many years as a pioneer in cross-cultural communication and simultaneous interpretation, published several best-sellers on the subject of communication theory, such as “Kikikata no Riron (Theory of Listening)” and “Hanashi-kotoba no Kagaku (Science of the Spoken Word).”

Communicators is a group centered on interpreters produced from the “Saturday School” established by Professor Saito, who was deeply committed to training interpreters. We have implemented education and training from the standpoint of communication studies, and continuously emphasized the importance of non-verbal communication elements in addition to linguistic ability.

Profile of the founder

Obtained a doctoral degree in speech communication at Northwestern University. Professor emeritus at the International Christian University.  Became the president of Communicators in 1994. Passed away in February, 2004.

After an active career as a pioneer simultaneous interpreter in Japan, she dedicated the rest of her days to training professional conference interpreters.

The late founder of Communicators, Professor Mitsuko Saito, often drew a “Hoshu no Tama” with ink on white paper, noting how it was impossible to draw the exactly same thing twice, but being amazed at how training enabled her drawings to become increasingly powerful, with even the drawings she regarded as being unsuccessful to have a certain flair.

The “Tama (ball)” represents a person in a state of no-mindedness; from this, power rushes forth, forming flames that ascend towards the heavens.
Treasure what you originally possess (the ball), and grow by working hard and learning from your experiences (making the flames grow higher).

Professor Saito said that she felt that respecting oneself led to the desire to respect and understand others.